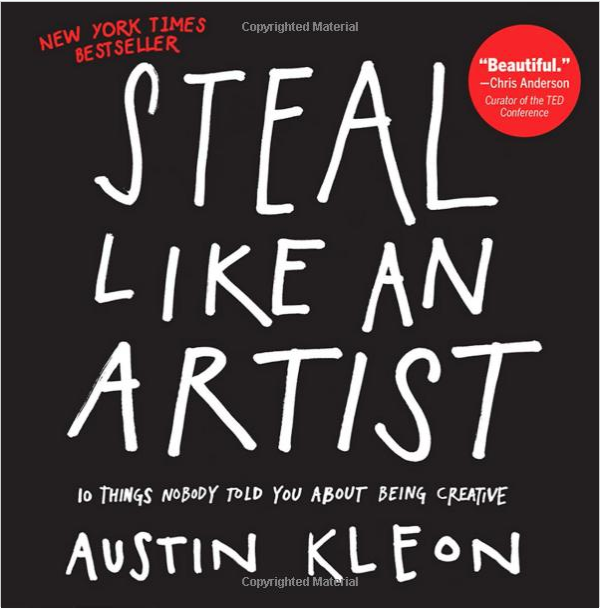 After reading Austin Kleon’s “Steal Like An Artist” I was pleasantly surprised how much I enjoyed the book and took away from it — or should I say, put in my swipe file.

For those of you not familiar with the book, it is the first installment in Mayor Andy Berke’s “Books With Berke” book club. Mayor Berke’s book club focuses on themes of creativity and collaboration stemming from his “City of Creators” message at the State of the City address.

I was skeptical of the book mainly because I am not an artist and I don’t necessarily view myself as a creator. What could I take from Austin’s words?

My book is lined with post-it notes, underlined phrases and even inspired me to share my thoughts with all of you.

One of the ideas that really struck a chord with me was the notion of just getting started. Early on in the book Austin writes, “In my experience, it’s in the act of making things and doing our work that we figure out who we are. You’re ready. Start making stuff.”

How many times have we all let the fear of unknown hold us back? The fear that we might be exposed for not being a subject-matter expert, the fear that an idea won’t be accepted, the fear we’ll get turned down for that job.

Sometimes, you’ll have to start without necessarily knowing how you want things to end up. It sounds crazy, but the fiber network that has made Chattanooga famous is an example of this. When we installed and “turned on” the Gig in 2010, we expected that Google, Facebook, and other Silicon Valley tech giants would be beating a path to our door. That didn’t exactly happen. We knew that we had a tremendously powerful asset — we just didn’t know quite how to maximize its potential. Today, the Gig is the literal foundation of our successful Innovation District, which houses 671 businesses, employing around 14,000 people (including the staff of the downtown Chattanooga Public LIbrary!) That success, however, has only come through a lot of hard work and more than one failed attempt to figure out just the right strategy for using the Gig’s power.

The answer, of course, is that there is no single right answer. There’s only hard work, lots of collaboration with lots of partners, and an incredible well of self-confidence that can keep you motivated. With the Gig, we knew that a big bet on our city’s creative capabilities would pay off in some terrific ways — but in no way did we know exactly how we’d get there, or the many steps — and missteps — we’d take along the way. Maybe most importantly, we know the journey isn’t over.

As Austin says, however, you’ve got to start somewhere. Where do you want to end up? Is there a project, program, and place that you want to make that you can’t get out of your head? Stay focused on where you want to get — and how you’ll feel when you finally get there. And then take the first step in that direction.

What are you waiting on?

Don’t forget to RSVP for the first Books With Berke event on June 20 at 6 p.m. to participate in a conversation with Mayor Andy Berke and Austin Kleon at the Downtown Chattanooga Public Library.