The Office of Performance Management and Open Data (OPMOD) is excited to announce its new data driven initiative called Chattalytics. Chattalytics is the next evolution of the city’s data program. Using the methods and tools of data science, the city will identify projects that help solve real world problems with data. 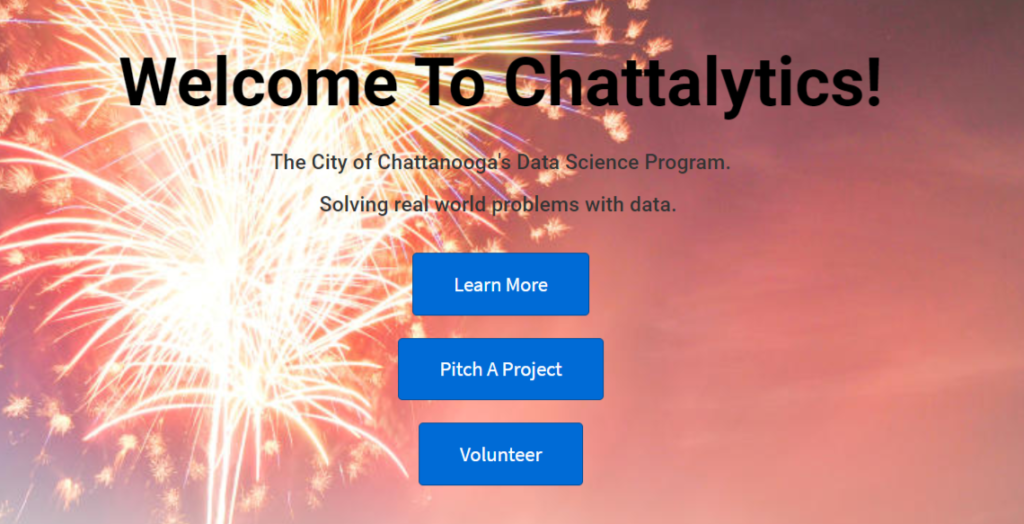 Looking forward, not back.

Data driven organizations can be thought of as asking a series of ever more difficult questions. It all starts with asking what happened. Looking back, data can show you what happened and when. After you know what happened, the next logical question is, why did it happen. Once again, data can be used to find root causes behind what happened. Up to this point the data has been used retrospectively, looking back to better understand right now. With Chattalytics the city is able to shift to using data to predict likely future events. The city can now start to ask what will happen. This allows the city to be proactive, instead of reactive, and solve problems before they reach a crisis point. Using the tools of data science to predict what will happen is not the only way Chattalytics projects can be used to improve services for Chattanoogans.

The different types of analytics projects?

Chattalytics can help you solve many different types of problems commonly faced by the city such as:

Finding a needle in a haystack - Predictive modeling can be used to pick out hard to find targets based on existing data sources. Sometimes finding out who or what to target for your service or policy is the hardest part. By using data science you can quickly find the target candidates. For example in NYC assessing compliance with restaurant waste disposal regulations, the city cross-referenced industry data on grease production with restaurant permit data and sewer back-up data from city agencies, allowing them to better-predict waste violations and to target enforcement (read more here).

Prioritizing work for impact - New ways of using information to strategically prioritize high-impact or easy-to-resolve cases. Often there is more work than the city has capacity to address right away. As a result, it is not uncommon for there to be a backlog of work. Chattaltyics can help the city prioritize work for the greatest impact. For example in Chicago they reviewed their backlog of pest requests and identified where these requests were near broken water mains and garbage as a way to identify locations at high risk of severe outbreaks.

Early warning tools - Predicting need from historic patterns to inform predictive deployment of resources or create new services. The saying, “an ounce of prevention is worth a pound of cure”, comes to mind for these types of projects. Early intervention tools allow the city to address problems when they are easier and less costly to solve.

Better, quicker decisions - Recommendation tools can bring better, actionable data to operational decisions. Often decisions are made without the necessary data or perhaps difficult to make because of too much conflicting information. Chattalytics seeks to support the decision making process of knowledgeable city staff with relevant, timely and easy to understand data. The idea isn’t to take away the decision making power of city staff but to empower them. For example, in Louisville, 911 dispatchers are supported with regular reports from computer-aided dispatch software which detailed patterns in turnaround times for specific hospitals and for specific crews so they can best decide how to respond to emergencies.

Optimizing resource allocation - Improved efficiency from data-driven deployment of teams and assets given that both a limited and problems seem to be unlimited. For example, in New Orleans, a project mapped optimal standby locations for ambulance crews, given the patterns of emergency calls seen in the city, in order to reduce response times.

Experimenting for what works -  Experimental testing to refine and improve services so you know if something is working. Using a simple A/B test you can tell with statistical certainty if a tweak or change to a program had the desired effect. Using this tool you can tell what language is most effective at getting people to join a new program, or which news channels are most effective at getting new sign ups, for example. These simple nudges can dramatically increase the effectiveness of programs and services. In New Orleans, experimental A/B testing was used to refine the content of text message outreach to Medicaid waiver program recipients, to maximize conversion rates.

If you are as excited about Chattalytics as we are, you can join in on the fun. On the Chattalytics website you can pitch departmental or community projects or sign up to volunteer to help with a Chattalytics project.